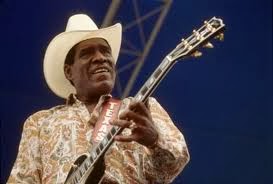 When I saw that this week's song selections came from the 80's my first thought was great at last a living Bluesman.
Regrettably, however Johnny Copeland died in 1997 at the tender age of 60 following complications after heart surgery.
He did though leave a great legacy of music particularly from his records on the Rounder label in the 80s and early 90s.
He was on the go when the Blues enjoyed something of a renaissance  playing with Stevie Ray Vaughan and Double Trouble and getting a Grammy in 1987 for the best traditional blues album for Showdown! recorded with Albert Collins and Robert Cray.
His daughter Shemekia Copeland is also a successful Blues singer and so the legacy lives on.
Go Johnny go!