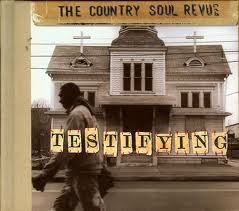 Something slightly different this week folks in that we are focussing on an album rather than a particular artist.
The good people from London's Casual Records who had previously delivered the two great compilations Country Got Soul volumes 1 and 2  pitched up at the studio in Dan Penn's house in Nashville  between 31st January and 11th February 2004 and recorded Testifying by The Country Soul Revue.
This features the likes of Dan Penn, Tony Joe White , Larry Jon Wilson, Billy Swann, Bonnie Bramlett, Reggie Young, David Hood, Spooner Oldham, etc a veritable who's who of the great and the good of Southern Country and Soul
The first song features Donnie Fritts who , the sleevenotes tell us " has a voice like a cup of sausage gravy: warm and bumpy"
The second song is a gorgeous number featuring George Soule perhaps better known as a songwriter but possessing a wonderful voice.Ernie Goggins from the great 27 Leggies recently did an interesting post featuring Mr Soule. Soule by name, Soul by nature.
This album really is the best of both worlds - a wonderful mishmash of two of my favourite types of music .
Again as the sleevenotes would have it " for every ounce of Webb Pierce, there's a pound of Ray Charles"
Listen and weep.