Fold Your Hands Child, You Walk Like a Peasant 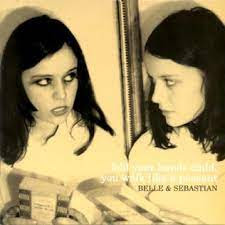 Like R.E.M. if I see anything from the back catalogue of Belle & Sebastian in a charity shop that  I don't have I  will pick it up. If you come from Glasgow like I do this is  much easier than in most places.

I think that the only album of theirs that I have actually bought in a record shop and paid full price for is If Your Feeling Sinister and it probably is still my favourite . Since then I have managed to pick up another seven of their albums with three EPs thrown in for good measure.

My latest acquisition is Fold YOur Hands Child ,You Walk Like a Peasant named after some graffiti Stuart Murdoch saw written on a toilet wall. It was their fourth album and was released in 2000 and was their last on the Jeepster label.

It is slightly more democratic than some of their earlier albums in that Murdoch is happy to share lead vocals with Isobel Campbell and Stevie Jackson. Having said that for the two songs I have chosen he sings lead on one and duets with Jackson on the other.

Eight down, three to go

Belle & Sebastian - I Fought in a War