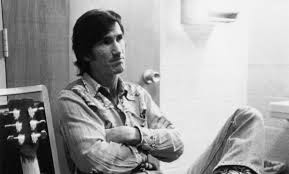 A low scoring round last week saw Townes defeating Steve Earle by 4 votes to 1 with their respective versions of Delta Momma Blues.

Townes is still absolutely romping the overall scores  by 5 to the Rest's 0 (or 5.5 to 0.5 if you count Nanci Griffith)

Last week Ernie was extolling the virtues of Steve Earle's cover of Loretta. However I had other plans. I'm now going to post a chunk of a post from September 2013

I had the privilege of seeing Townes live twice before his death on New Year's day 1997.The first time was at Glasgow's King Tuts Wah Wah Hut and the second was at the County Hotel in Perth.My pal and I decided to make a night of it and booked into the hotel. Imagine our excitement when we learned that Townes was staying in a room down the corridor.One beer led to another leading to my pal "accosting "Townes with the demand that he "play Loretta Townes, play Loretta."To his credit he duly obliged but being somewhat traumatised he forgot the words!Still a total genius though

The question is would another hero of mine John Prine forget the words if he was in a similar situation? I suspect not. As you would expect Mr Prine applies his usual brilliance to the cover. However, for me, it was always going to be Townes and not just for the sentimental reasons above.

Others, of course, may choose to differ.