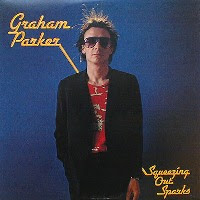 About a month or so ago I  attended a small record fair in a pub called Phillies in the Shawlands district in Glasgow's South Side. It takes place on a Saturday every month or so with two or three vendors.

One is a chap called Gordon better known as Uncle Wald to music lovers on Twitter. He is ages with me and a lover of much of the same  types of music as me.

One act that we both like is Graham Parker and the Rumour and on recent visits Gordon has helped plug the gaps in my vinyl collection. It is widely accepted that it is pretty much essential to have the first five albums from the band which were released between 1976 and 1980.

On a previous visit earlier this year I came away with Heat Treatment leaving 1979's Squeezing Out Sparks as the only one to get. I'm pleased to say that that gap was subsequently plugged a  few weeks back.

It was voted album of the year in the Village Voice's Pazz & Jopps critic poll with Rolling Stone later ranking it at number 334 in  its list of the top 500 albums of all time. It's very good but maybe not quite that good.

Graham Parker & the Rumour - You Can't Be Too Strong