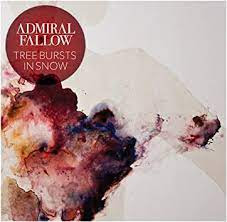 I've now acquired three out of the four the latest being the CD version of Tree Bursts on the Neettwerk label from my now nearest charity shop on Battlefield Rd. My previous nearest one on Cathcart Rd is now a  greengrocers.Tiny Rewards is the one I've still to hunt down

The band are led by Louis Abbot and Sarah Hayes who I saw doing an acoustic set in the Some Great Reward record shop when I purchased their latest offering.

Back to Tree Bursts and here is Louis explaining the title The title refers to the sound and the image of an artillery shell exploding into a cluster of snow-drenched trees... I'm also astounded by the sheer volume of gun related violent crimes throughout the world but in particular in the U.S. The lyric from 'Tree Bursts' was inspired by the idea of the effect that losing friends through violence, in particular during times of war or conflict has on young men and women. They are "the leaves that fall louder than backfire, all orange and halloween red .I'm glad he cleared that up for us.

One which I feel will benefit from a few more listens but  in the meantime here are a couple of tunes to be going on with.

Admiral Fallow - Guest of the Government