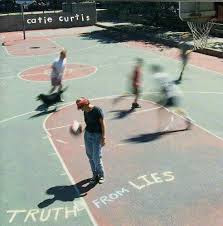 The Missing Records Haul - Catie Curtis - Truth From Lies
I was vaguely aware of Catie Curtis having previously featured her song Love Takes the Best of You alongside Kelly Willis in a post in May 2017
Therefore I thought I would take a punt on Truth From Lies one of her earliest albums from 1994 on Hear Music.
Catie is an openly gay artist and her sexual politics are reflected in her lyrics. I  would imagine that there were some challenges back in the 90s given the conservative nature of country music but perhaps it was better in the more liberal folk scene. Thankfully things have moved on.
Catie has had a long and varied career as this biography highlights and is even available to officiate at weddings! Her songs are well written and interesting but are perhaps a little too bland for my tastes and although I have worse records than this space dictates that this one will not be a keeper
Catie Curtis - Radical
Catie Curtis - Just Getting By
Posted by Charity Chic at 08:00