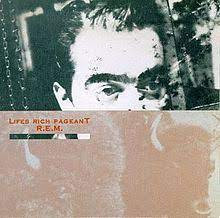 The Missing Records Haul  - R.E.M. - Lifes Rich Pageant
Missing Records is a Glasgow institution. By my reckoning their current location in Oswald Street is at least their 4th City Centre location all of which have been in or around the Helanman's Umbrella
They always have a huge range of second hand CDs and vinyl and you never come away empty handed.
Like many of you, I'm sure, I really enjoyed The Singular Adventures of R.E.M at J.C's place collated by the man himself and the Robster who has followed this up with An R.EM. Summer of Imaginary 7''s
I would never profess to have even a quarter of their knowledge of the band  but over the years I have gradually acquired the bulk of their discography.
There are still a couple of the IRS albums to acquire so I was pleased to part with a pound to pick up their 4th studio album from 1986  Lifes Rich Pagaent. one of their best. (NB - no apostrophy)
It is one that I was familiar with having it on a cassette which has long gone to landfile.
The track listing on the CD is a bit confusing and incorrect but I got there in the end. I've gone for the two below but such is the quality that I could have gone for any of  of the 12 on the record.
R.E.M. - Cuyahoga
R.E.M. - I Believe
Posted by Charity Chic at 08:00