I Had The Blues But I Shook Them Loose 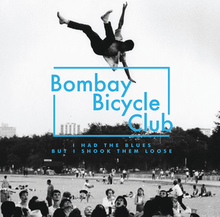 There are two or three blogging dllemas going on at here at the moment which are inter- connected and causing me a bit of grief.

Firstly recently I have picked up a shed load of stuff in various forays. This in itself of course is not necessarly a bad thing. It can however begin to cause a problem as I am trying to post my charity purchases.

Secondly the volume of stuff coming in and other commitments at the moment makes it difficult for me to give  everything a proper listen and it often takes two or three listens to decide whether of not it is a keeper.

Thirdly space is getting seriously short at the moment. I either need to get some additional shelving which will be tricky to fit in the muso room, cull some stuff or be more discering as to what I keep.

I Had the Blues But I Shook them Loose the 2009 debut album by Bombay Bicycle Club on Island  is a case in point. I picked it up in Newton Stewart ,in fact I picked up two albums by them. I've only listened to it once so far and at this stage I genuinely don't know whether it is a keeper or not. I have not listened to the second one yet.

If I decide that it merits further listens I encounter the storeage problem. How often will I listen to it? Rarely I suspect but that probably is the case for about 95% of my collection.