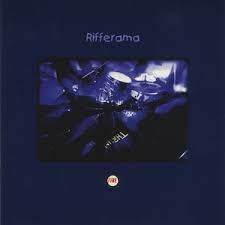 I've lost count of the times that I've bought a CD in a Charity Shop not being sure whether I already had it or not. In a good few cases it was already on the shelves.

However this is a first. I picked up Rifferama a 1994 album by Thrum on the Fire label in the full knowledge that I already had it. I  knew that I had bought a copy from discogs a couple of years ago I was so surpised and excited to see a copy that I felt obliged to buy it. You can't have enough of a good thing.

SonicHits point out that with comparisons to Lone Justice and once described as like Janis Joplin fronting Teenage Fanclub much of the strength of Thrum's guitar-driven sound is built around Monica Queen's luxurious voice with Johnny Smillie's arrangements and guitar playing integral to achieving the complete sound.