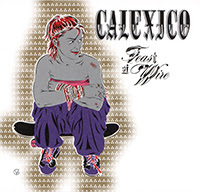 There are some people out there who claim that Feast of Wire by Calexico is the greatest album of all time. Whereas they may be prone to a little bit of exaggeration there is no denying that it is indeed a mighty fine album.

Confession time - it is the only one of theirs that I physically own with the exception of Years to Burn their latest collaboration with Iron & Wine.

I do however have copies of Spoke, the Black Light and Hot Rail the first two of which featured recently as part of  George's Second is Better than First series

Calexico, as I'm sure you all know, hail from Tuscon, Arizona and are exponents of music with a desert noir slant with a slice of mariachi and conjunto thrown in for good measure.
Head honchos Joey Burns and John Convertino were previously the rhythm section of Giant Sand who have also  graced this series
They are named after a city in California on the US/Mexican border which is kind of fitting when you consider the music they play

Feast of Wire has a little bit of everything - even athough it looks to have been overlooked altogether in the blurb on Calexico's Wiki page.
There is desert rock, country, some stonking instrumentals , Wilco like squiggly stuff and the piece de resistance the brilliant Across the Wire depicting the struggle and the inherent dangers  to Mexican immigrants  attempting to cross the border into the US.﻿

Calexico - Across the Wire