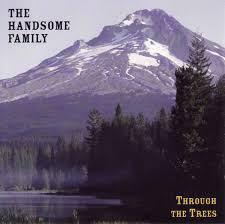 Let's face it The Handsome Family, the band who invented Gothic Americana, were always going to feature in this series. But with which album?
Not Twilight their 6th album from 2001 which is listed in rateyourmusic's 100 Essential Americana albums Yes 34 albums in and I have just started looking at other lists.
Not even 2000's In the Air although that came close.
No I have gone for Through the Trees their third  album  from 1998 on Carrot Top Records in the States and on Loose Records in the UK.
Chosen for a variety of reasons. It was the first of their's that I bought and the one being promoted when I first saw them live but primarily because the song Cathedrals has one of the greatest opening lines of all times


Please don't think that that is the only good song on the album. They all pass muster with Weightless Again and The Giant of Illinois also being particularly good.
For the uninitiated The Handsome Family are the husband and wife duo of Brett and Rennie Sparks who met while patients in a psychiatric hospital. Renee does the songwriting and Brett the singing in a deep baritone voice.
Mojo appear to be with me in that they consider Through the Trees to be their best and  the 9th best Americana album of the 90s
They accurately highlight that the band's music focuses on the macabre usually being dark and with a high body count.
While intertaining in short doses it can after a while  become a bit one-dimensional.After seeing them two or three times I felt that live they were a bit samey and I have not had the desire to see them again.
The same can probably be said about their music - better to dip into them every now and again rather than have them on heavy rotation.
I did however enjoy giving this a spin for the first time in a while