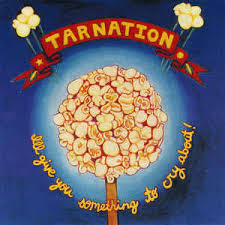 Last week I suggested that The Handsome Family were the band who invented Gothic Americana. George took me to task on this and felt that this accolade belonged to Tarnation.

He is probably correct given that their debut album I'll Give You Something to Cry About was released on Nuf Sed records in 1993.

It was not the first of thers that I acquired -  that would have been their second album Gentle Creatures released on the larger 4AD label in 1995.As is often the case when a band who have previously had a recent album on an indie label sign to one of the bigger boys a number of the tracks reappear on the follow up.It looks to me as though 6 of the 15 songs on  I'll Give You Something to Cry About also appear as part of the 15 on Gentle Creatures. Not a total rip off considering the amount of tracks - you could actually think of them as bonus tracks.

Tarnation, of course , feature the songwriting skills and the unique dulcet tones of Paula Frazer  from Sautee Nacoochee, Georgia. Her father was the town preacher and her mother the church organist and she grew up singing in the church choir. I think it's fair to say that given the subject matter most of her songs would not have featured in  church.

Thanks go to George for me having this record. He spotted it in a record shop in Birmingham marked down from £3.90 to £2.90. As he already had it he gave me a phone to see if I wanted it. The answer was of course yes and I picked it up the next time I saw him. According to discogs it is worth about ten times that now,

Tarnation - Do You Fancy Me