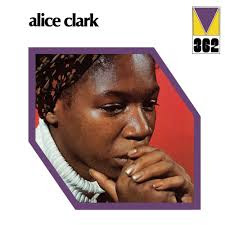 One of my birthday presents to myself was the 1972 eponymous and indeed only album by soul singer Alice Clark  on the Mainstream label.
It is one of those albums that I had heard of but not really heard apart from the occassional track. One which has cult status and which is  held in high regard by many.
I'll let Philip Freeman who made this the Bandcamp album of the day on June 18th 2019 do the talking:


Alice Clark, who died in 2004 at the young age of 57, is a legend among funk and soul aficionados. Her recorded legacy consists of two late ’60s singles and this self-titled album, produced by Bob Shad for the Mainstream label in 1972. The pensive cover photo is a key to the music contained within: the album has the classic soul sound of Muscle Shoals at times, particularly on the almost Aretha Franklin-esque opening version of Jimmy Webb’s “I Keep it Hid,” but moves into a softer, jazzier realm on tracks like “Looking at Life” and “It Takes Too Long to Learn to Live Alone.” Clark’s vocals can swell like a river threatening to overflow its banks, but more often than not she’s beautifully controlled, flowing along with the serenity of Roberta Flack or Dionne Warwick.
The band on Alice Clark includes session aces like drummer Bernard Purdie and guitarist Cornell Dupree, and Shad’s production is lush without sacrificing visceral impact. Clark, born in Brooklyn, had the restraint of a city girl, rather than the unfettered emotionality of a Southern church-bred singer; there’s something guarded, a you-won’t-hurt-me undertone to her delivery. And while the music is fundamentally soul, there are dashes of jazz thrown in here and there, particularly on the closing “Hey Girl,” which lets both the trumpeter and saxophonist off the leash, albeit briefly.
A worthy  neighbour for Gene Clark on the vinyl shelves
Alice Clark - I Keep it Hid
Alice Clark - Maybe This Time

We are away for a few days so regular series  only will feature next week.. I'll hopefully be back after that new Blogger platform permitting.