50 Americana Albums You Should Hear Before You Die - Faithless Street 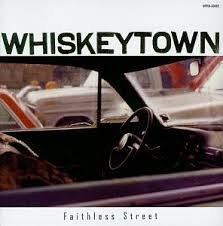 Whiskeytown  from Raleigh, North Carolina were always going to feature in this series
It was just a toss up as to which of their three studio albums to feature. Good though it is the final one 2001's Pneumonia was fairly quickly ruled out.
So a toss up between 1995's Faithless Street and 1997's Stangers Almanac. A close call but Faithless Street won the day mainly because I  have the re-issued extended version from 1998 on Outpost Recordings which omits Oklahoma but includes 9 extra tracks including Excuse Me While I Break My Own Heart Tonight which is probably the best song on Strangers Almanac.

One of the seminal Americana bands the line up on Faithless Street was Ryan Adams (Guitar and vocals), Caitlin Cary (violin and vocals), Eric "Skillet" Gilmore (drums), Steve Grothmann (bass) and Phil Wandscher (guitar, vocal)
Listed in alphabetical order but perhaps no surprise that the two most well known artists feature first.
Ryan Adams obviously went on to enjoy an extremely successful solo career  but has caused me a moral dilemma which I will touch on below.
Caitlin Cary also enjoyed some solo success and recorded with Tres Chicas, The Small Ponds,NC Music Love Army and Thad Cockrell (thanks for the copy of Begonias Ernie ) She takes the lead on the wonderful Matrimony

Moral diemma time.
Ryan Adams has always been  a spoilt brat with an ego the size of Texas. While annoying I can live with that.
As things stand he is scheduled to feature later in this series.
However he has been accused of  a pattern of manipulative behaviour in which he dangled career opportunities while simultaneously pursuing female artists for sex.  here
The accusers include a girl who was 14 at the time and the singer Phoebe Bridgers. Adams has always protested his innocence but has recently apologised for "mistreating" women

I'm inclined to believe the women although  it appears that he is now contrite possibly because his career and reputation are on the line. Given this I'm in two minds as to whether to feature him or not and would welcome your views.
I've no qualms about featuring him as part of Whiskeytown because there are other band members who do not deserve to be tainted by association. A bit like Morrissey and The Smiths