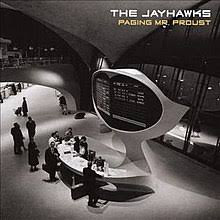 For a while The Jayhawks were just about my favourite band on the planet.
I have a copy of their 1986 debut album The Jayhawks/Bunkhouse Tapes and then the next six all the way up to  2003's Rainy Day Music. I also saw them on a number of occasions during that period.

Since then they have been much less prolific releasing only four further albums from 2011 up to this year's XOXO.
I've recently been making it my business to *ahem* acquire these later albums.
One such album is Paging Mr Proust from 2016 on the Thirty Tigers label and produced by Peter Buck.
The band's line up is Gary Louris, Marc Perlman,Tim O'Reagan, Karen Grotberg and Kraig Johnson all of whom have featured on previous albums (all of them in Louris and Perlman's cases) and is the same personnel that played on 2000's Smile

I wasn't that impressed on first listen but after another couple of plays I'm beginning to find one or two things that suggest that whereas it is not a patch on the band in their prime it coul well become a grower. Some nice acoustic type tunes and harmonies with Gary Louris enjoying a brief thrash on the guitar on a couple of occasions.

The Jayhawks - Lovers in the Sun

The Jayhawks - The Devil Is In Her Eyes