50 Americana Albums You Should Hear Before You Die - Guitar Town 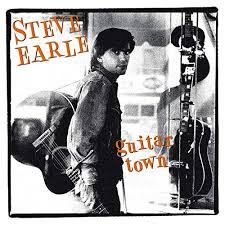 Steve Earle has released around 20 or so albums over the last 40 years either as a solo artist or with his band the Dukes. I have most of them but my favourite still remains his 1986 debut album Guitar Town on MCA. It has to be said that 1995's Train a Comin' gives it a good run for it's money.

It has 10 tracks (according to Wiki) and is only 34 minutes and 345 seconds long and not a second it wasted. My copy has an 11th track a live recording of Good Ol' Boy (Getting Tough) taking it up to a whopping 38 minutes and 47 seconds long.

Steve Earle arrived on the scene around the same time as the likes of Dwight Yoakam, Lyle Lovett and Emmylou Harris and helped give Country music the kick up the backside it so desperately needed.
The songs have a rougher edge to them and cover subjects that had more resonance with a younger audience used to other forms of music

My grandaddy was a miner, but he finally saw the light He didn't have much, just a beat-up truck and a dream about a better life

Songs about a generational shift and about leaving small town America to search for a more interesting and rewarding life. They also reflect the difficulty of living in abject poverty in Reagan's America.
You could argue not much has changed although Steve Earle is still taking a stance albeit an increasingly lonely one.