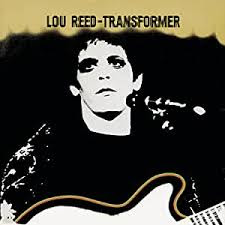 A couple of weeks ago I mentioned that I really should get myself some more Velvet Underground. That hasn't happened yet but here is the next best thing - some more Lou Reed.

Like the Pixies and Doolittle I had never  got round to picking up Transformer his 1972 second solo album on RCA primarily because I had most to the songs on two best of albums - one vinyl and one CD.I was 11 when it came out, maybe a wee bit too young for some of the subject matter.

Even though it cost me 25p I thought what the hell, why not push the boat out.

I shall spare you the ubiquitous Perfect Day and Walk on the Wild Side. Rather you are getting Vicious, which I have never owned before, and Satellite of Love which is quite possibly my favorite song of his.

Produced by some boy called David Bowie and arranged by Mick Ronson - wonder whatever happened to them.