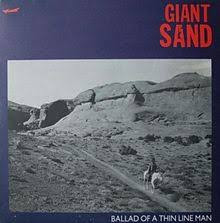 When I first drew up the list of albums to feature in this series back in November the first 40 or so were absolute no brainers which would have featured any time I carried out a similar exercise.
The final 10 or so were a bit more fluid and may have been replaced by something else were I to redo the list.
Ballad of a Thin Line Man by Giant Sand is probably one of those which would have come into that category although having an Americana  list that did not feature the Tuscon desert rock of Howe Gelb  would be pretty strange indeed.
From 1986 and originally on the Zippo label it is their second album from 1986. I have it on a 2 albums on 1 CD along with their debut Valley of Rain.
It gets the nod primarily because of the brilliant version of the  Johnny Thunders song You Can't Put Your Arms Around a Memory. That, and the fact that it has the better cover (these things are important).
2000's Chore of Enchantment and Howe Gelb's 2006 solo album 'Sno Angel Like You are also on the shelves (right beside each other) and also came into consideration.

The line up is Howe Gelb on vocals, guitar and piano, Scott Garber on bass, Paula Jean Brown on vocals and guitar and Tom Larkins on drums.
John Convertino and Joey Burns did not come along until later but who knows they may yet feature!

Giant Sand - You Can't Put Your Arms Around a Memory