The Day of the Ray 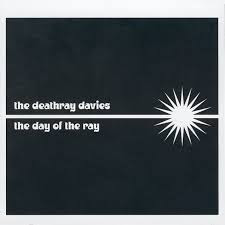 You know how it is.You catch a band that you have never heard of playing a stonking set and  then when you eagerly purchase the record it is never quite the same. A bit like that Cypriot brandy you enjoyed on holiday and then you open the bottle you brought back home.

Dallas band The Deathray Davies are one such band. I saw them a couple of times live and they were very bouncy, loud and full of energy.
This led me to purchasing not one, but two of their records. The Return of the Drunk Ventriloquist their second album from 2001 has featured here before so todayit is the turn of the third album 2002's The Day of the Ray.
This was a random dinner accompaniment during the week. It is actually not a bad slab of garage pop full of scuzzy guitars and catchy hooks and better than I remember from it's last play which was a good few years back.
See what you think.

The Deathray Davies - I'm From the Future

The Deathray Davies -She Can Play Me Like a Drum Machine
Posted by Charity Chic at 08:00