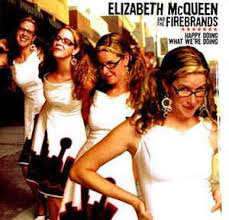 Happy Doing What We're Doing by Elizabeth McQueen and the Firebrands is still lying waiting to be put away after featuring on the latest Happy Hippy Chick Mix instalment.
Therefore I thought that I would share some more Pub Rock covers with you. You can thnk me later.

Let's kick off with Love's Melody the first song on the album and a cover of a song by Ducks Deluxe. The writer of the song Andy McMaster went on to join the Motors and wrote Airport. This is obviously better.

I'm sure that Graham Parker and the Rumour need no introduction so without further ado I give you a cover of Local Girls.

As well as Graham Parker at CCHQ Dave Edmunds has legendary status. A1 On the Jukebox was co-writtent with ex Kursaal Flyer Will Burch who wrote Nick Lowe's biography (a Nick cover also features)  and the excellent No Sleep Til Canvey Island. If you have my copy please can I have it back..

How did an American come to love Pub Rock songs so much that she did an album of covers.
I'm lifting the reason from a previous post.

Her uncle gave her a Rockpile album - my aunt gave me the Glitter Band! There is no justice in this world.


Elizabeth McQueen and the Firebrands.-Love's Melody

Elizabeth McQueen and the Firebrands -A1 on the Jukebox