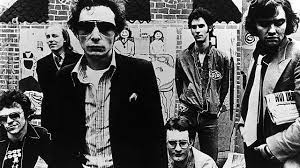 My recent More Pub Rock Favourites Covered post included a cover of Local Girls a song by Graham Parker and the Rumour.
At the time George commented that he had nothing by them which was a shocking omission on his part. In fairness it was something that he quickly rectified and by way of penance he pushed two I don't have 1979's Squeezing Out the Sparks and Struck by Lightning a solo album from 1991 in my direction.
Their first three albums  Howlin' Wind (1976), Heat Treatment (1976) and Stick to Me (1977) are must haves given that the band were on fire at the time.
Parker at the time was often compared to Elvis Costello and Joe Jackson.Sadly he was never as commercially successful as either of them. Sometimes life just ain't fair.

If you are not familiar with them you should obviously rectify that at the earliest opportunity
1980's Best of  available for buttons on Discogs is a good place to start. 14 tracks and everyone a belter

Graham Parker & the Rumour - You Can't Be Too Strong

Graham Parker - She Wants So Many Things
Posted by Charity Chic at 08:00