Late Jumping on the Bandwagonesque 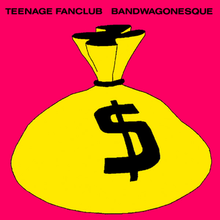 I was criminally well into the blog before I posted anything by Bellshill's finest Teenage Fanclub. I've tried to make up for that but there is still plenty out there for me to delight you with in due course.
A song or two from 1991's Bandwagonesque album has popped up here or there but this is the first time that the album has enjoyed a post in it's own right. Not before time I hear you cry.

I can't remember whether it was this one or Grand Prix which was the first of theirs I bought proving that once more I was pretty late to the party.
Voted album of the year in 1991 by US magazine Spin beating Nirvana's Nevermind to top slot, and rightly so.
And yet it is not my favourite of theirs but it does come a close second to Songs of Northern Britain.

Norman Blake, Gerard Love, Raymond McGinley and Brendan O'Hare wear their influences proudly on their sleeves most notably the Beach Boys style harmonies and the songs of Big Star.
They have also influenced countless others. particularly from Scotland. In a previous post I suggested Whiteout, Attic Lights and Vera Cruise who are all on the shelves. I'm sure there are countless others.

A seminal record and a seminal band.An album you would buy for the cover alone
Sunny day music