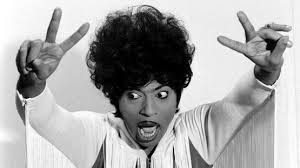 Sad to hear that the Georgia Peach Richard Wayne Penniman better known to the world as Little Richard has died at the age of 87
In June 2001 Tutti Frutti topped a list in Mojo of the Top 100 records that changed the world.
Keith Richards recalls that on hearing this it was as though the world changed suddenly from monochrome to technicolour.

Certainly music, and the world in general, would have been a far poorer place without him

A Wop Bop A Loo Mop A Lop Bam Boom