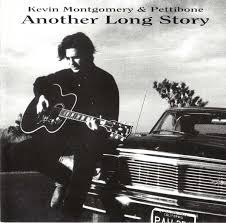 Kevin Montgomery has an affinity with Glasgow in general and with King Tut's in particular.
So much so that he recorded an album Live From Glasgow with his band The Roadtrippers featuring a concert at King Tuts from  Friday June 27th 2003.
I was in the audience as I had been on a number of other occassions
All his albums are worth a listen but I have gone for Another Long Story which is attributed to Kevin Montgomery and (Doug) Pettibone
Hal Horowitch in a review for AllMusic was quite  taken with the album when it was subsequently released in his native US four years after it's release in Britain. He is one of a number of Americana artists who enjoyed more success on this side of the pond than in his homeland.
Horowitch writes : Another Long Story is a classy and beautifully rendered collection of singer/songwriter tunes that deserves to be embraced by Americana fans. The grayish tunes are immaculately crafted, borrowing from rootsy folk, rock, pop, and country, but seldom falling into one genre
All the songs on the album very quickly became crowd favourites alongside those from his debut album Fear Nothing and from 2.30 AM
Kevin is one of those journeymen artists constantly touring the world and playing to small but dedicated and appreciative audiences.
In his own country he has done a couple of 50 States in 50 Days tours.
If he pitches up anywhere near you go and see him. I can guarantee that you will have a good night out.