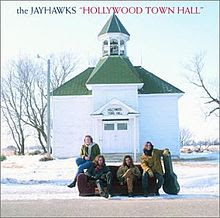 There are times when I think that Hollywood Town Hall by Minneapolis' finest band The Jayhawks is perhaps the greatest album of all time. There is never a time when I don't think that it is one of the top 10 albums of all time.

From 1992 on the Def American label it was their third album, their first on a major label and the one which shot them to prominence.
The classic line up of  Marc Olson on vocals/ acoustic guitar, Gary Louris on vocals and electric and fuzzy guitar, Marc Perlman on bass and Ken Callahan on drums. Production by George Drakoulias

It seems to have been released to mixed views but not to these ears.
Ten tracks ( two of which Two Angels and Martin's Song also appeared on their 2nd album Blue Earth) and 42:36 in length.

The band has produced ten albums in total.Tomorrow the Green Grass and Rainy Day Music being for me the best of the rest with this remaining the pinacle. I did an ICA on them over at JC's place

It was around then that I first saw them live. The first of many occassions.

Any of the ten tracks could have easily featured but I've gone for two which haven't graced these pages before.