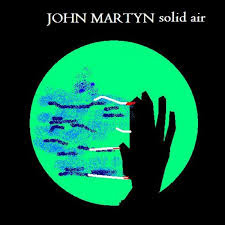 I picked up a second CD at BRICC in Ballantrae in the shape of the 2009 Deluxe Edition of John Martyn's 1973 classic album Solid Air.

The second CD is missing.I can live with that as it seems to be a collection of  alternative takes,demos and live version. Plus my total outlay was only £2.20 for 2 CDs and a vinyl album.
As it was a double CD it is slightly thicker and consequently takes up more space on the shelves but that is one to file under first world problems.

I've always had John down as a folk artist but this has a little bit of everything including Blues and Jazz which can get dangerously close to being twiddly in places.
Sounds proclaimed that "Solid Air flows beautifully and shows the entire spectrum of music that John Martyn has at his fingertips"
Melody Maker is a little bit more poetic stating that  stated that "there is a concentration upon timbre, building up into some very extraordinary landscapes,"
Q rates it as the 67th Greatest British album  ever.

I now have this and One World along with a couple of anthologies. The acquisition of Grace and Danger is probably the only essential one still required. Unless anyone else knows different.

Here are the ones that you are probably expecting.

John Martyn - May You Never
Posted by Charity Chic at 08:00