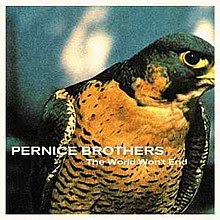 You'll be glad to know that it's official The World Won't End. The Pernice Brothers have spoken

The World Won't End was there second album released in 2001 after a 3 year hiatus following their 1998 debut Overcome by Happiness when Joe performed as a solo artist and as a member of Chappaquiddick Skyline. I saw him around then and am pretty sure that I also saw the Pernice Brothers
It was released on his own label Ashmont Records although mine is the UK version on Pias/Southpaw.

I also use Joe Pernice as rhyming slang for Fleece  ie "Where's my Joe Pernice?"