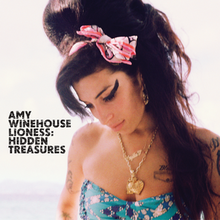 We managed to sneak in a brief visit to Galloway prior to the lockdown.Things were a lot quieter down there but there was only one show in town.
Managed to visit a few charity shops and pick up a few CDs which will probably be the last for a while. Nothing startling I'm afraid.

I only managed to pick up one in Stranraer. Lioness: Hidden Treasures is a posthumous compilation album from Amy Winehouse , her third after Frank and Back to Black.
I was a bit reticent about buying it as I was wondering whether it was an attempt to cash in on her death. She died on 23rd July 2011 with the album being released on 2nd December 2011. I was a bit reassured to subsequently read that it was released in aid of The Amy Winehouse Foundation
I still can't say that I am 100% comfortable with it though.

Described fairly accurately be Andrew Ryce of Pitchfork who writes:there's little on Lioness:Hidden Treasures that sounds throwaway, or that it shouldn't have been released, but there's equally little that sounds absolutely essential.

Her other two albums are of course absolutely essential and should remain as her legacy.

Amy Winehouse - Will You Still Love Me Tomorrow

Amy Winehouse - The Girl From Ipanema