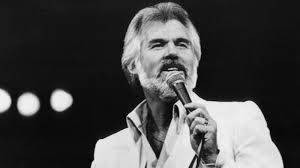 I was sad to hear of the death of Country legend Kenny Rogers at the age of 81.
I wouldn't say that I was a huge fan but he bit write some terrific tunes. Mrs CC is more of a fan so there are a few of his CDs on the shelves. She showed me a particularly moving tribute from Dolly Parton.
Rest easy Kenny.
There'll be time enough for countin' when the dealing's done.

Kenny Rogers - The Gambler
Posted by Charity Chic at 08:00