50 Americana Albums You Should Hear Before You Die - Ashgrove 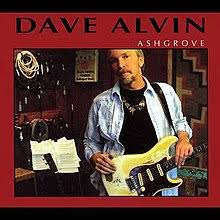 Now you may be wondering just what a Blues number is doing in an Americana series.
I shall try and explain.
Ashgrove is the first song on the album of the same name by the great Dave Alvin which was released in 2004 on the Yep Roc label.
The song is a reference to the Ash Grove music club in Los Angeles which Dave and his brother Phil frequented as teenagers watching the likes of Big Joe Turner, T-Bone Walker and Lightnin' Hopkins.
So not a bad musical education then.

Dave is a terrific Blues guitarist but one who can effortlessly slip to Country as anyone who has had the privilege of seeing him live can testify. He does fit the wider genre of Roots Music which is sometimes used to describe the mix of traditional folk, Blues and country.

The rest of the album has a more Americana feel about it. The second track Rio Grande is bona fide Americana and is co-written with fellow musician Tom Russell. The Man in the Bed is an extremely moving depiction of his father's struggles with dementia.

As an added bonus when I bought this, in the days when you could afford to pay postage for music from the States it came with a two track bonus CD , one track from which also appears below.

He is one of my all time favourite artists. You should check out his solo stuff, his work with the Blasters, with the Guilty Men and indeed the Guilty Women  and his collaborations with his brother and with Jimmie Dale Gilmore. You will not regret it.

Dave Alvin - The Man in the Bed