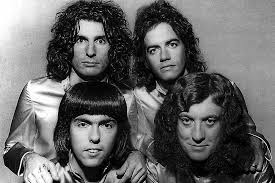 Everyday by Slade popped up on the radio the other night and it got me thinking as to whether they had appeared on these pages before. No, seems to be the answer which is slightly strange given that The Sweet have appeared a few times.
A Glam Blur v Oasis debate. Who was the best?
I'm going for Sweet in this instance given that spelling was never Slade's strongpoint.
I actually saw Slade at the Glasgow Apollo just after they had moved on from their glam phase and had become a semi Heavy Metal Band.Not quite sure why.

Slade - Skweeze Me, Pleeze Me
Posted by Charity Chic at 08:00