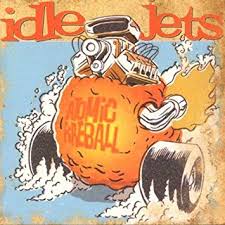 On Sunday morning Mrs CC selected a random CD, put it on and challenged me to guess who it was.
I was pretty stumped. It sounded like powerpop so I guessed wrongly that it was Matthew Sweet.

I got the powerpop bit right though. Turns out it was the Idle Jets with their 1999 album Atomic Fireball. A band I have not seen nor had I heard of them when I bought the album.

I have seen the lead singer Pat Buchanan though which led me to buy this and a subsequent solo album by him.
Nothing more to add really other than I think some of you may like it.

Idle Jets - Genius of the Obvious