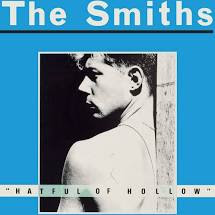 My last charity shop purchase of 2019. Hatful of Hollow by The Smiths. Purchased from my local charity shop in mint condition vinyl for a pound. I saw it on sale in Fopp the next day for 14 quid which made me feel rather smug.

A compilation from 1984 on Rough Trade it features these two singles and their B-sides and a number of songs from various Radio 1 sessions.
In 2000 Q named it as as number 44 on the list of the top 100 Greatest British Albums Ever. I was not aware that compilation albums were considered for such lists.

From the days when Morrissey was  annoying but in a different way than he is now and actually relevant.
No doubt he has some cointroversial views on Coronavirus which hopefully he won't share with us.

The Smiths - William, It Was Really Nothing