Words of Wisdom and Hope 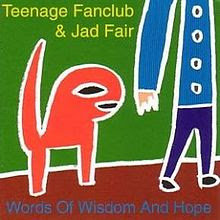 I was pleasantly surprised to see Words of Wisdom and Hope by Teenage Fanclub & Jad Fair on the shelves of a Fort William charity shop.
From 2002 and on Stephen Pastel's Geographic label it sits between 2000's Howdy and 2005's Man-Made in the Fanclub discography..

I was familiar with the  somewhat distinctive cover (drawings by Jad) but had no idea as to the music or indeed who Jad Fair is. A few clicks of the keyboard tells me he is from Michigan and along with his brother David is a founding member of lo-fi alternative rock group Half Japanese. He has also collaborated with the world and his wife including The Pastels. In all honesty I'm none the wiser.

The music is quite interesting though with the Fannies exploring their inner Velvet Underground backing Jad's Lou Reed.

Teenage Fanclub & Jad Fair - Near to You