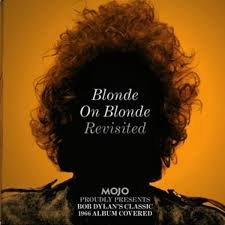 I picked up Blonde on Blonde Revisited in the Blythswood Care (a Christian charity prevalent in the Highlands) shop in Broadford on Skye.
Broadford is Skye's second largest settlement after Portree and boast a large Co-op whose car park possibly has the best view of any Co-op  car park.

Released by Mojo in July 2016 it is a track by track tribute commemorating the 50th anniversary of  the Bob Dylan original album. Yup that's right - half a century!.

It would have been good to have had this when I did my Dylan Covered series but realistically none of the covers come close to the originals. I suppose that you can't improve upon perfection.
These are two of the better ones in my humble opinion

Phosphorescent - I Want You