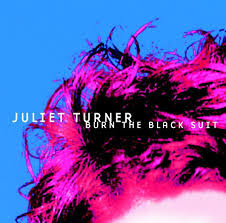 My final Broadford purchase was a 2001 album Burn the Black Suit by Juliet Turner and it was one that I bought in error as I was thinking Juliette Lewis the actor who produced some rocky number with her band the Licks.
This is more folky and singer songwritery from an artist from Northern Ireland but based in Dublin.
Her second album it went double platinum in Ireland and was voted one of the top 100 Irish albums of all time by HotPress magazine (no, me neither) readers in 2004. She was also championed by the legend that was Sir Terry Wogan.

However, it is not for me. Although she has a pleasant voice and I'm a fan of people singing in their own accents  I found it  a bit worthy and  a bit  of a slog to get through.
So one that's going back - not to Broadford but somewhere more local

I thought I had also nabbed Josh Rouse's Country Mouse City House but sadly there was no disc only the cover. The nice lady let me take the cover within which my burn of the album now resides.

Juliet Turner - Take the Money and Run
Posted by Charity Chic at 08:00