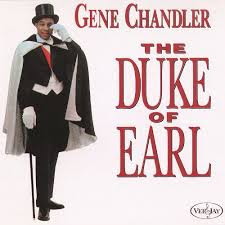 We are slumming it a bit this week as we go down the ranks from Crowns to Coronets with dukes and earls featuring today.

Ernie Goggins suggested a double header by featuring Duke of Earl. I was thinking along similar lines but when I reached for my Darts album I found it wasn't on it. Therefore I had to source it and it seemed to make more sense to opt for the early 60's original by Gene Chandler which I must admit I wasn't familiar with.

Another double header of sorts as I give you Steve Earle and the Dukes with a song from their 1987 album Exit O.

More dukes and earls next week.

Steve Earle & the Dukes - I Ain't Ever Satisfied
Posted by Charity Chic at 08:00