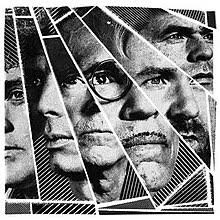 I must admit that I was reasonably intrigued when F.F.S. was released in 2015 on the Domino label. Not that intrigued though that I was minded to spring for the album.
I was, however, intrigued enough to fork out a quid for it in a charity shop in Auchterarder.
For the uninitiated F.F.S. was a short lived collaboration between the bands Franz Ferdinand and Sparks hence the name.
The album it pretty much what you would expect from such a collaboration. It was critically well received upon release

I'm trying to think of other interesting and unusual collaborations.
Bowie & Bing and Nick Cave & Kylie are the first two that come to mind. Over to you.