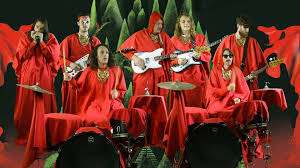 Queen's last week, kings this week.
Two new songs and an excuse to include yet another song from the excellent Sub Pop compilation which I featured last week.

Kyle Thomas  from Vermont in the US of A features as he records as King Tuff. Described as a garage rock and as a neo-psychedelia act this song is from his 2018 album The Other on Sub Pop.

If you were to look up neo- psychedelia in a dictionary  and if it was there (unlikely I grant you) the definition may well read King Gizzard & the Lizard Wizard.From Melbourne, Australia they have been on the go since 2010 and have been extremely prolific with about a dozen records to their name.
This song Beginner's Luck is from their 2017 album Gumboot Soup and is also availalable on the ATO 2018 sampler available on Noisetrade which is where I got it from.

This series was not intended as a compare and contrast but it turned out that way last week and I enjoyed the interaction.
It's King Tuff for me this week.