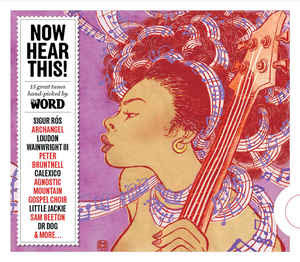 Another compilation for you today with this one also being picked up in a Fort William charity shop.
I never knowingly bought the Word magazine but I have picked up a couple of the accompanying  Now Hear This! CD's over the years.
This one is number 68 from October 2008. They come in a clever envelope like cover. Clever, that is unless you are trying to get the CD out or back in the sleeve while driving.

As yesterday I'm ignoring the acts whom I am familiar with, good though they are, and featuring on a couple of new to me acts.
The splendidly named Acoustic Mountain Gospel Choir an acoustic Blues quartet from Calgary  make a splendid racket with a Son House number. This song is taken from their 2008 album Ten Thousand on Balling the Jack Records.

David Vanderville is somewhat more mellow. This is taken from his album Waiting For the Sunrise on the Secret Canadian label. He also played and recorded with the late great Jay Bennett of Wilco fame.

David Vandervelde - I Will Be Fine
Posted by Charity Chic at 08:00