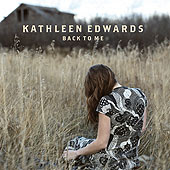 I picked up Back to Me the 2005 second album by Canadian alternative country artist Kathleen  Edwards in Fort William. Earlier this year I picked up her fourth and as things stand last album Voyageur in Oban.
This leads me to conclude that they were handed in by the same person who lives somewhere in between these two Scottish north western towns. Who knows I may find her other two records there in due course.
They are obviously the places to look.

Pleasant, if not spectacular stuff. The first track featured was released as a single and the second appeared on the soundtrack of the film Elizabethtown.

She is currently on a sabbatical from music since 2014 with occasional rumblings of a re-appearance.