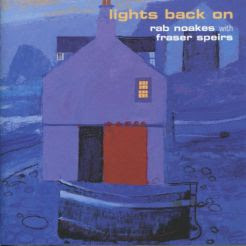 Seeing as how it is Friday are you in the mood for something a wee bit different?
Thought so. Well hows about a Scottish folk legend covering Beck and Rufus Thomas?

Rab Noakes is well known on the Scottish music scene.He has been performing as a singer/songwriter since 1970 and is now a producer and his Neon Productions  produce a number of programmes for BBC Radio Scotland.
He has been a member of Lindisfarne and Stealers Wheel briefly and before they hit the big time.

On this album , which I got for £1.50 in a Nairn Charity shop still sealed,  he is joined by Fraser Speirs on harmonica.
I wasn't sure at first, but having played it a couple of times I think it could be a grower.
There are a few of his own songs but Bob Dylan and Sam Cooke among others also get the treatment.

Rab Noakes (with Fraser Speirs) - Walking The Dog
Posted by Charity Chic at 08:00