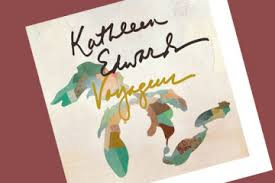 A slice of Alt Country today from Kathleen Edwards with her album Voyageur .You will note that I have opted for Alt Country as opposed to Americana mainly because Ms Edwards is in fact Canadian.
It is her fourth album  which was released in 2012 and co-produced with Justin Vernon of Bon Iver fame.
She's not the most prolific of artists as this was only her 4th album since her debut in 2003.

I've always been a bit ambivalent about her as although she is clearly talented I saw her early in her career where she made what I considered to be derogatory comments about the artist who had been on stage before her the great Ray Wylie Hubbard. I'll put it down to the immaturity of youth.

It seems that she has now left the music business opening a coffee shop in the Ottowa suburb of Stittsville.
Something which stumped me in one of Rol's  excellent Saturday Snapshot conundrums.

My last Oban purchase - we are of to Lochgilphead next

Kathleen Edwards - For The Record