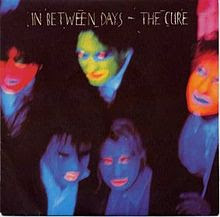 I am reliably informed that Mrs CC's sister was The Cure fan of the family, so presumably this is one of hers.

In Between Days was released in 1985 and was the first single from the album  The Head on the Door.
It only reached number 15 in the charts but hung around for 10 weeks.
Interestingly although they released some great singles they only troubled the Top 10 on 2 occasions with The Love Cats peaking  at number 7 and Lullaby at number 5.
I suspect all but the most ardent Cure fans if quizzed wouldn't come up with Lullaby being their biggest hit and would probably also be surprised that Boy's Don't Cry only reached 22.

There is debate as to the spacing and title of the song but In Between Days seems to be the one most quoted.

The Cure - In Between Days

The Cure - The Exploding Boy
Posted by Charity Chic at 08:00