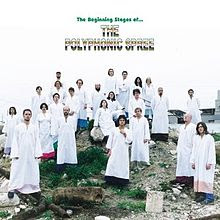 The acquisition of The Beginning Stages of The Polyphonic Spree in the Red Cross shop in Lochgilphead took me back to the early years of the century when my pal Gogs and I attended the SXSW festival in Austin, Texas on three consecutive occasions.
This was in the days before social media so it was word of mouth or local  intel that led you to acts appearing on the Fringe of the festival. Thanks to an internet forum we found ourselves wandering the streets of an Austin suburb one year in search for some acts that were performing.
It was quite a bizarre experience to turn a corner and to come across 20 or so folk dressed in white robes singing on someone's front lawn (which was in better nick and the one on the album cover).
Tim de Laughter and his entourage quickly  and briefly acquired a degree of cult status on both sides of the Atlantic although given their outfits I have always associated them with a different kind of cult along the lines of the Wickerman
The album contains 10 songs listed as sections which were originally intended as a demo until they quickly hit the big time and 4 alternative versions which are somewhat more polished.

And yes there is a volume 2.

The Polyphonic Spree - Light and Day

The Polyphonic Spree - It's The Sun
Posted by Charity Chic at 08:00