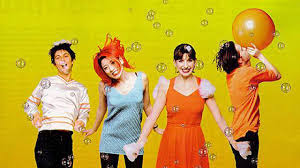 The first of the Oban purchases is the Blondie-esque Ladykillers probably the best known single by Brit pop band Lush.
From 1996 on the 4AD label it reached number 22 in the UK charts and 18 in the US Modern Rock charts.

As was the way then there were two different versions of the CD single . Mine is disc 2 which in addition to the title track features Heavenly, Carmen and Plums & Oranges
It also appeared on the 1996 album Lovelife.