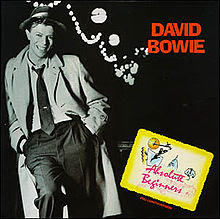 The first of the job lot belonging to Mrs CC and one of the best of the bunch if not the best. Mrs CC claims it was one of hers.
The title track from Absolute Beginners the film by Julian Temple based on the book by Colin MacInnes.
As well as Bowie the film features fellow musicians Ray Davies, Sade and Patsy Kensit.
Both Steve Nieve and Rick Wakeman provide keyboards on the single.

The film pretty much bombed but the single was a resounding success reaching number 2 in the UK  singles chart following its release on 3rd March 1986
You are only getting the A-side as the B-side Absolute Beginners (Dub Mix) kept sticking. Consider yourselves fortunate

We are off to Ballachulish for an overnight so there is every chance we may hit the charity shops of Fort William and/or Oban. Stay tuned.
Posted by Charity Chic at 08:00