Out of the Ether 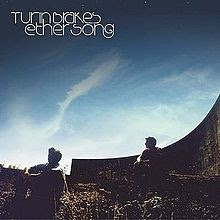 It was only last October when I picked up my first Turin Brakes record namely their debut The Optimist LP.
A band who had  up until then pretty much passed me by but a record I quite enjoyed.
I was therefore pleasantly surprised and delighted to pick up their second album 2003's Ether Song for 50p in the Red Cross charity shop in Lochgilphead.
A slight change of direction in that it is more electronic than its acoustic predecessor . Still pretty good though.
Totally coincidentally I have opted for the two tracks which feature on a sticky on the front of the jewel case which I have just noticed.. Great minds and all that.