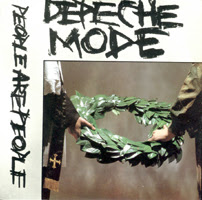 This series seems to be currently stuck in the 80's - obviously the peak single purchasing period of Mrs CC and her sister.
From March 1984 People Are People was Depeche Mode's 10th single and their biggest hit peaking at number 4 during a 10 week residence in the UK singles charts. It is also the one that first brought them to the attention of our American friends.
Despite it's success its writer Martin Gore describes it as one of his least favourite songs and has not performed it live since 1988. Popstars can be quite obtuse.
The b-side In Your Memory written by Alan Wilder is pretty tasty.

Depeche Mode - In Your Memory
Posted by Charity Chic at 08:00